skip to main | skip to sidebar

Starting afresh is always difficult, however sometimes it can help you get new ideas. I have moved my blog to Room For Improvement. If you liked reading my posts, I hope you will follow me at my new location. Take care.
Posted by Varun Sharma at 11:12 PM No comments:

Life's a mystery isn't it? Some people get to experience the kind of mystery that is very warm and fuzzy, the one that gets you all excited and your heart starts brimming with joy. Like the way the questions "why is the sky blue?" are a mystery to a 2 year old. Like when you know that you have done extremely well in an exam and the results are a mystery. Like when you know that you are in love, but you don't know if the other person loves you or not. Or like when your birthday is near and you don't know what your friend's planned for you.

I just wonder what kind of mystery my life is.
Posted by Varun Sharma at 11:10 PM No comments: 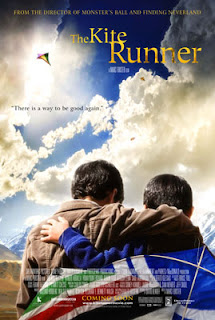 "For you, a thousand times over", the protagonist says, as he promises his nephew to run a kite for him, as the credits roll. The movie leaves you wondering how the lives, of the family depicted in it, turns out as time goes. I believe that the movie is a very faithful adaptation of The Kite Runner, a novel that I loved when I read it. The novel follows the life of Amir, as he grows up in Afghanistan, then when he moves to the USA and finally when he returns to his place of birth because, as his uncle Rahim Khan puts it, "there is a way to be good again."
That the story is good comes as a no brainer, what with the success of the original novel. The settings of the story is as good as the characters that come in it. The main characters, the towering Pashthun father, Baba, the ever faithful Hassan and the writer who seeks redemption, Amir - are very well developed and have a lot of depth. The minor characters are also developed well enough for them to stay in your mind long after the movie is over. The story starts in the, pre-Taliban Afghan and as the story progresses, one cannot but feel sorry for the sad state of the once beautiful Afghan. The casting of the movie is near perfect, as all the actors, especially the two children who took on the roles of Amir and Hassan, have done a fantastic job of handling their characters.
But the two things that make the movie so perfect are the cinematography and the music. First the cinematography by Roberto Schaefer: throughout the movie you can feel the mood of the movie being complimented by the colours and the camera. The pristine mountains of Afghan, the pomegranate tree, the dog resting in the shade, all add to a breathtakingly beautiful setting. And not to forget the excellent graphics used to depict the kite flying competition - just amazing! The movie would have been very bland without an excellent background score by Alberto Iglesias. Although it might not be to everyone's taste, the music does a very good job of giving a good setting for the movie. Also there are a few tracks which can be listened to alone. My favorite pick is "Fly a Kite" which gives me a wonderful sense of peace whenever I listen to it. Anybody who loves Indian fusion music will love this track.
This movie gets you thinking and I think many of you would love it too.
Posted by Varun Sharma at 11:29 PM No comments:

That day I was walking by a park, when I saw the sun going down creating all the colours in the sky that would make even a stone a romantic. I realised that it had been a long time since I had enjoyed a beautiful evening and went into the park and saw a rusty old bench sitting on gravel on its thin bent legs. The green paint on it was peeling off and that made it look like a shriveled old man with scabs on his body. It looked as if the bench was complaining that it had lots of wisdom to give, only there were very few who actually wanted to listen to it. A butterfly was sitting on it and flapping its two wings slowly in a periodic motion, as if it was very slowly gathering everything the park had to offer and slowly taking all of it inside its tiny body.I somehow felt drawn to the bench, there was nothing that I could get from it but somehow I needed to sit on it.

As I sat on the bench, I had a look at what the park had to offer. There was the lush green grass on which if you sat, you would feel each of the tiny grass blades touching you as if telling you that it was there only to make you feel comfortable. There was the small lake not far away from the bench, on which a pair of geese where swimming together like a couple in love. As they swam, the waves that they produced disturbed the sun's reflection making the sun look like a happy person dancing.

I relaxed on the bench and breathed deep taking in all the smells in the park. I closed my eyes and stretched my legs. I felt everything in that small place, the old bench, each blade of grass, the ripples in the lake, the geese and the dancing sun had accepted me for who I am and were glad about it. I don't remember for how long I sat like that. Maybe a minute, maybe an hour. It didn't matter because I felt like I was in heaven.

I felt a small rustle of a dry twig near the bench and unwillingly opened my eyes to see who was causing the disturbance in my heaven. I opened my eyes and tilted my head towards the sound and there in my heaven I saw an angel. What else would one expect in a heaven, I wondered. I now realised what poets meant when they said beautiful. Her skin was the colour of a hazlenut and her hair was so black, it absorbed all the colours of the universe into it. Everything about her face could only be described as soft. The curves her cheekbones made, the ways her eyes looked at the world and the smile. She was standing near the bench and looking at the impending sunset and smiling, smiling as if she had discovered the answer to all the difficult questions of life. When she walked, her legs touched the hem of skirt and caused them to twirl, making it seem as the skirt was dancing a love dance. She approached the bench, slowly turned around and sat at the other end of the bench. I sat there, looking at the angel, afraid to talk, afraid to breath, afraid that anything I did would make her disappear. She looked like a beautiful rose, when the morning dew had just settled on it. She looked at a small wild flower growing near the bench, softly picked it up and looked at it with such fascination that I would have only seen in a child. She handled the flower delicately and I knew the flower was very happy. She sat there looking at my heaven and it seemed like the whole of the park belonged to her, with every breath of hers she was breathing life into it. I don't know for how long we sat there, just like that, she like the queen of the world and I like a man who had seen a God. Suddenly, she turned her soft face and looked at me. I saw a pair of beautiful black eyes, looking at me, taking me completely in them. It seemed like they had a purpose and I was sitting there, playing my part in helping that purpose. Her lips parted and a voice as sweet as honey told me, "Thanks for sharing this beautiful evening with me." Before I could speak a word, she stood up, turned around and started walking. I was too shocked to run behind her and beg her to talk to me more, to tell about herself and if not anything to just share that old bench with me for sometime more. But she was gone. I resolved to come back to this place everyday, to make sure that I would meet her, my angel, again. I started dreaming. I started hoping.

The next morning I woke up like a man in love, like a man haunted and like a man addicted. As I went about my morning chores there was nothing else I could do, but think, think like a mad man. I dressed up, and sat to have my breakfast, and opened the newspaper. There in the second page I saw her. Those same pair of eyes looking at me, as if taking me completely in. The heading read, "Girl Commits Suicide". I threw up. My angel had reached her heaven.
Posted by Varun Sharma at 12:54 PM 2 comments:

A beautiful piece of creation....

How does one come up with a song like "Innu Daya Baarade Daasana Mele"?? If you are a kannidaga and a serious music enthusiast, and you havent listened to this song, you are missing out on something. You have to feel the rush of emotions when you listen to this song, then you'll know why Sri Purandara Dasa was who he was. Only he knows what he must have felt to come up with something like that. The raaga that makes the "Geete" what it is, well i dont have words enough to describe it. When i heard it today, I could feel all the hairs on my body stand up. Even as I write this I keep playing the piece of music, which feels out of the earth, in my mind and my eyes get moist. I think everyone has to find that one thing in life for which one feels so deeply that it doesnt matter what else exists or doesnt. I hope I find that "thing". Maybe that day I'll know who I'm. Till that day I'll keep singing "Innu Daya Baarade Daasana Mele".
Posted by Varun Sharma at 9:46 AM 2 comments:

One feels a lot of things, but when it comes to writing, a very few are gifted. I have never been able to express myself in writing, now maybe thats a good thing ;). I have seen people write amazing stuff in their blogs. Maybe one day I'll be among them. But today I need an ear to listen to me which I dont think I'll get, so its going to be a database that stores my thoughts and webpages that are going to reply to them. I think that befits a computer engineer. Cheers.. :)
Posted by Varun Sharma at 9:26 AM 1 comment:

Varun Sharma
People think i'm smart, i think i can do better, i never see myself doing that.. Now do you know what kind of a person i am?? Naaaa...